1. Canyon Creek Ice Cave
Also called the Ing's Mine cave because the trailhead is located along the old Ing's Mine road, Canyon Creek ice cave is a must see for all cave enthusiasts.  It's located on the side of a mountain so the views are spectacular and it's large and goes in a substantial way so there is much to explore.  When I visited there was a large icicle in the back of the cave and an ice wall.

2. Grotto Creek Cave
I came upon this hidden treasure during a winter hike.  My crew decided to take a left at the end of Grotto Canyon and we followed it up a valley and that's where we found the cave.  I tried to hike to it but the path was snow packed and too hard to climb, however my friend James managed to make it to the entrance of the cave. 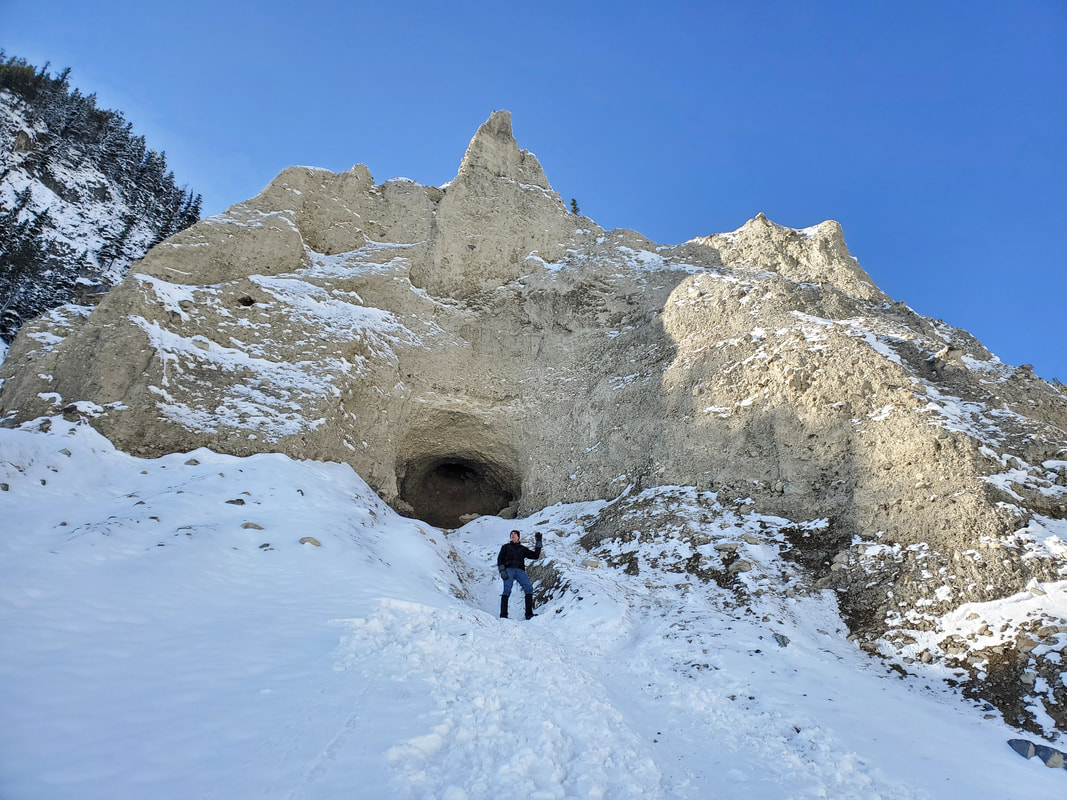 3. Heart Creek Bunker
This little gem is a man made cave started in 1969 as a vault storage area to protect critical documents in the event of some catastrophic emergency.  This Cold War era relic was never finished and never used and is a popular hiking destination, especially for a scary Halloween hike.

4. Panther Falls Ice Cave
This is my favorite winter ice cave.  In the summer the water is rushing too fast down Panther Falls to access the cave behind the falls, but this is not the case in the winter.  It turns into a gorgeous ice castle. 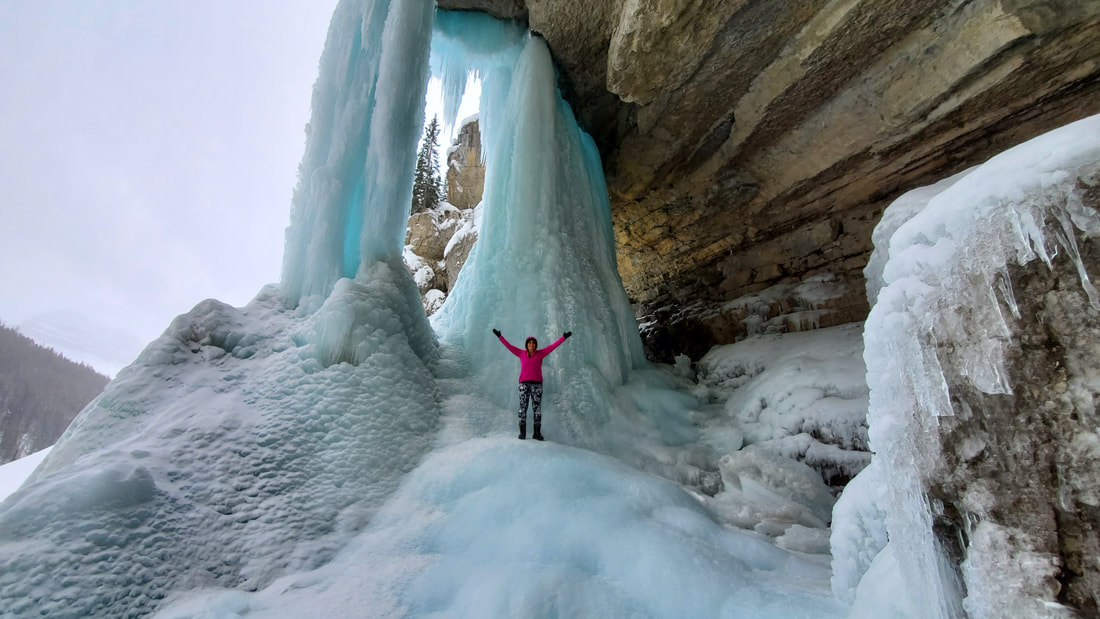 5. Marmot Creek Falls Ice Cave
Most people don't venture above Troll Falls but those who do are rewarded with multiple other waterfalls including my favorite Marmot Creek Falls.  You can walk behind this adorable waterfall and in the winter it transforms into a magical ice cave. 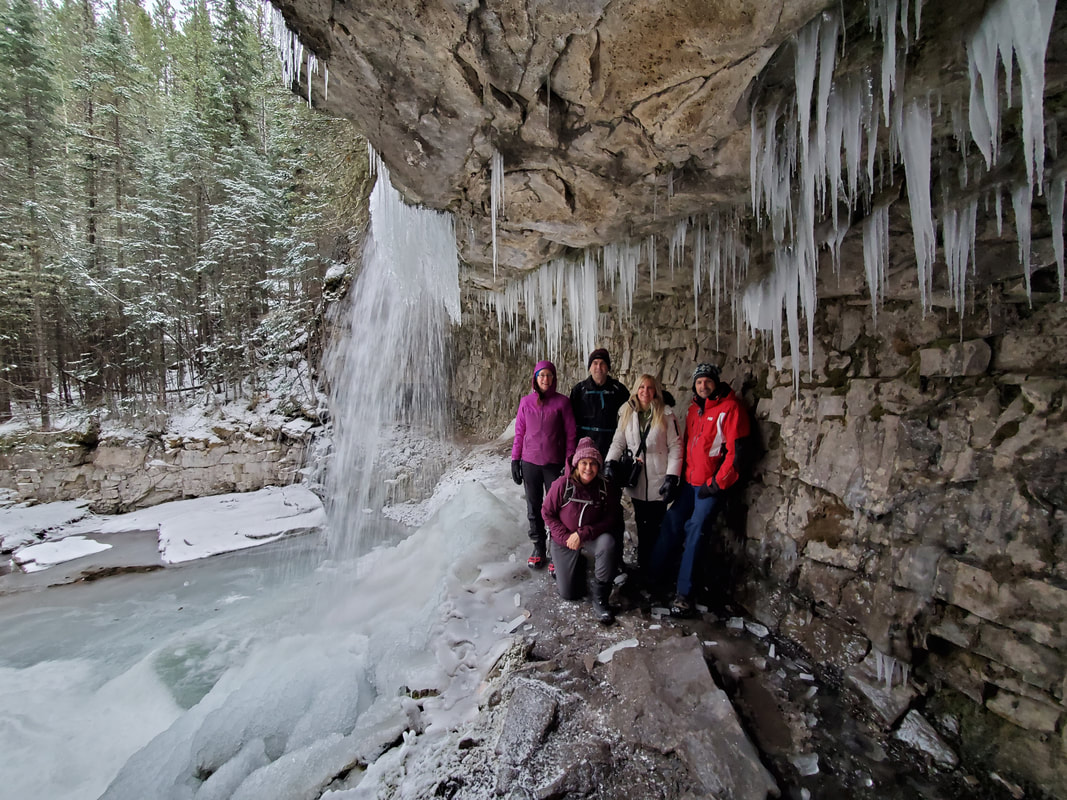 6. Johnston Canyon Cave and Ice Cave
This is a cave that is best visited in the winter because in the summer this area is closed of to protect an endangered bird called the Black Swift.  The trail down to this area is located between with Upper and Lower Falls.  There are two caves, one in the wall of the canyon and another behind the waterfall.  The waterfall cave freezes into an ice cave in the winter. 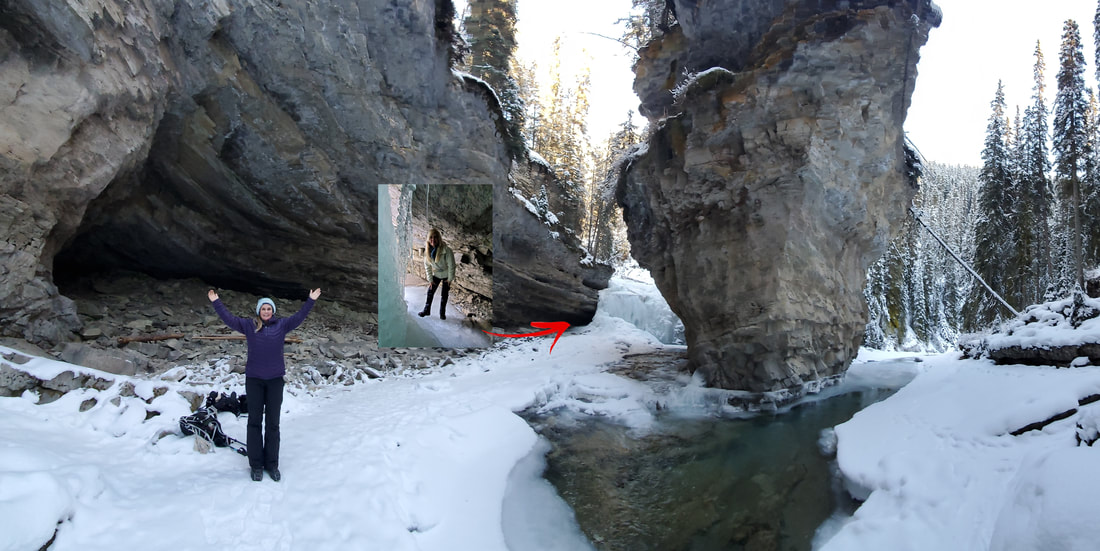 7. Sheep River Falls Cave
Sheep River Falls are very picturesque due to their location and because they can be seen from inside a cave.  Well its not a traditional cave, more like an overhanging ledge but it's super cool just the same. 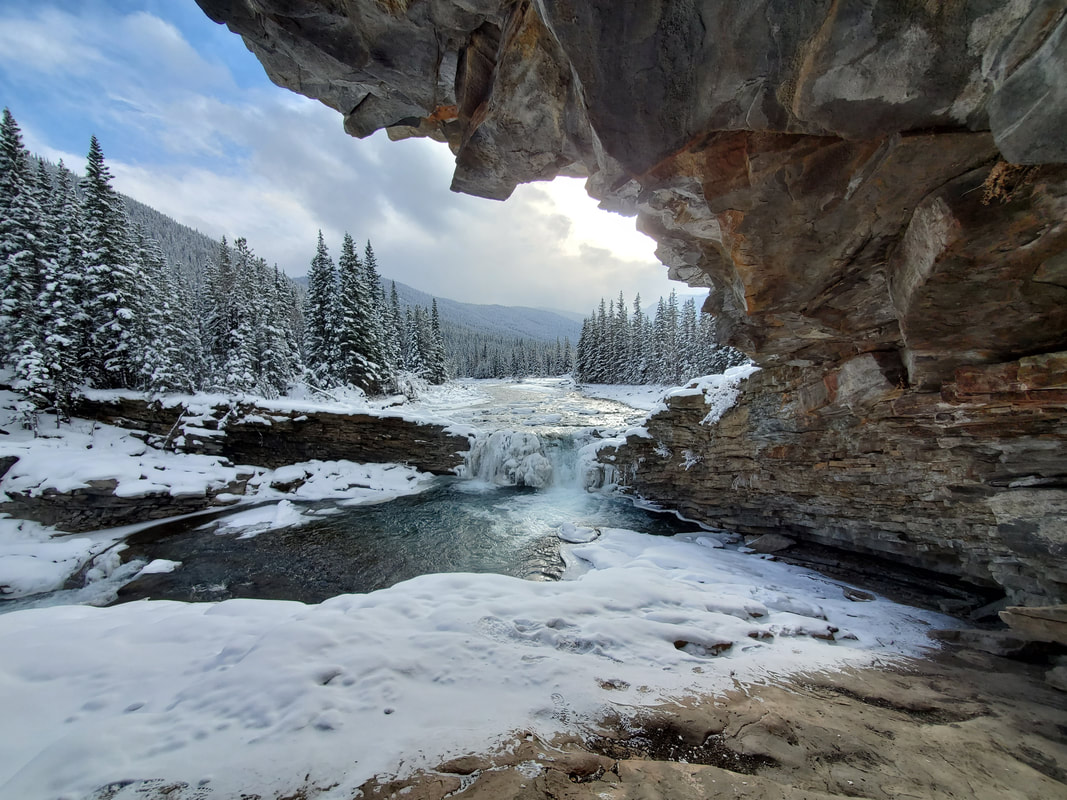 8. Fish Creek Ice Cave
If you want something right inside Calgary, the Fish Creek Ice Caves are a great place to visit.  The are located a short distance from the Bow Valley Ranch parking lot.  Take the south trail over the bridge and then take 2 rights until you are walking along the river and you will see them on your left.  In the winter the creek freezes and you can walk right inside them.  We visited in the spring when there was only a remnant of the icefall left and the cave was not easily accessible without walking through the cold water. 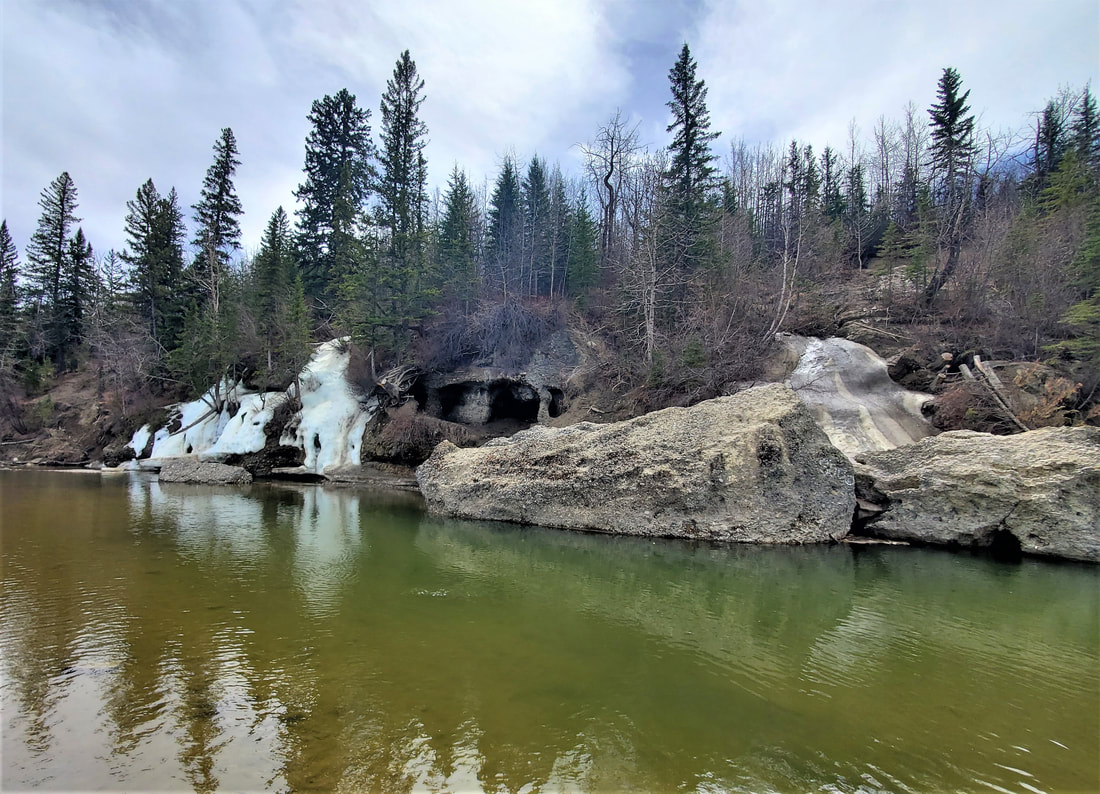 9. Hoodoo Creek Ice Cave
The area around Abraham Lake is one of my favorite places to explore.  If you hike up the Hoodoo Trail past the two large hoodoos through the creek bed you will you will find the entrance to a large cave on the right side up the mountain.  The main cavern is large and leads to a second cavern with a very high ceiling that looks like a tunnel up to the abyss.

10. Rat's Nest Cave
Locate under Grotto Mountain, this is one of Canada's longest caves and can only be accessed via a cave tour with Canmore Cave tours.  The cave got its name from the bushy tailed wood rats that have built their nests at the entrance to the cave.  The crew and I took the adventure tour and were in the cave over 4 hours.  We visited multiple caverns and shuffled through a number of squeezes.  I would only recommend this tour for people without mobility issues and a fear of confined spaces.  Be sure to watch the video first to see if this is the cave for you and if it is then check out the Canmore Cave Tours website for more information and to book your adventure.
BONUS: Natural Bridge Ice Cave
This amazing ice cave is located in British Columbia between Field and Golden and can be visited within a day trip form Calgary.  It is beautiful to visit in the summer but in the cold of winter it freezes and becomes a magical ice palace. 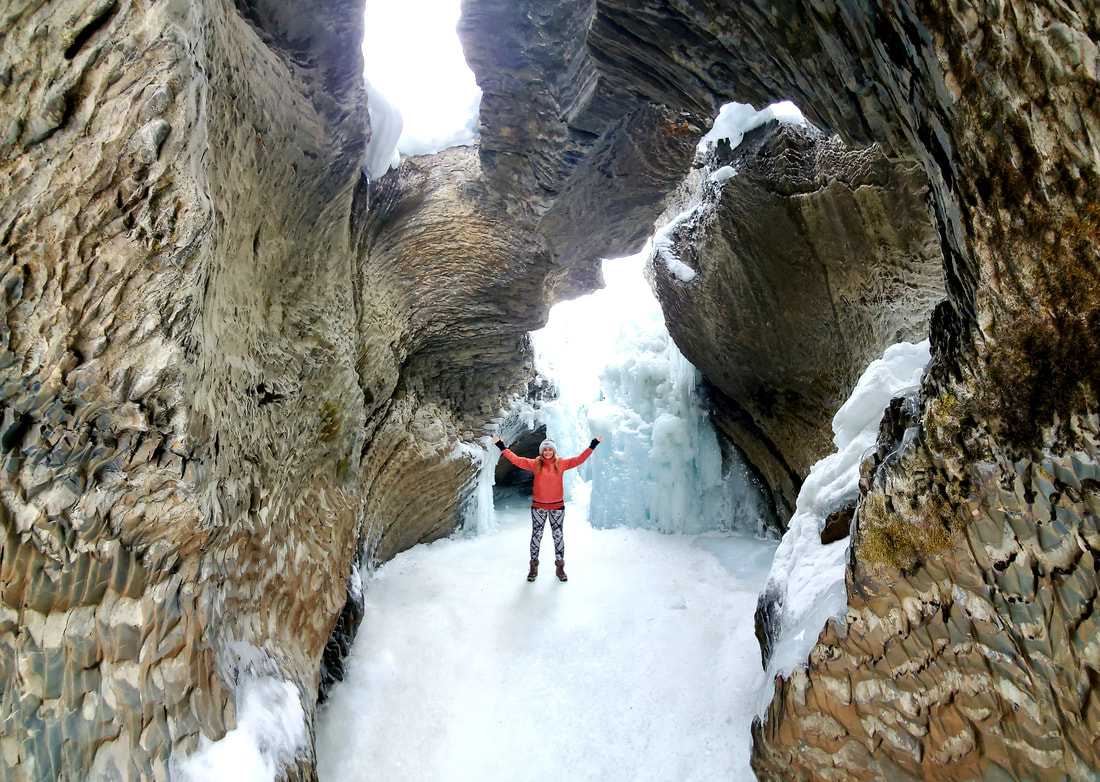